Cloud of Bone, by Bernice Morgan 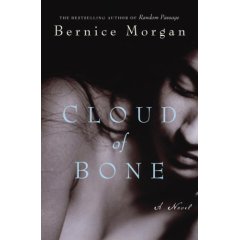 Cloud of Bone is another of those books that I’m much too prejudiced to be reviewing, but I will anyway.  Bernice Morgan is not only my favourite Newfoundland author, not only a friend and mentor, but also my aunt.  I have to tell you that in the interests of full disclosure, and then I have to beg you to believe that even if I knew nothing about her and had just randomly picked Cloud of Bone off a bookshelf, it would still have blown me away.

Cloud of Bone tells three separate stories that don’t fully come together till the very end of the novel.  The first is the story of Kyle Holloway, a Newfoundland teenager who almost accidentally enlists in the navy in World War Two and ends up a deserter, hiding out in a place that once provided him with sanctuary as a child.  I found Kyle in many ways the most  compelling of the three characters: he is a difficult, desperate young man without much sense of hope or ambition, ready to sink to the lowest common denominator as soon as one is offered.  Yet he is likable as well as pitiable, and as he waits for what he thinks will be certain death I couldn’t help hoping fate would turn around for Kyle.

END_OF_DOCUMENT_TOKEN_TO_BE_REPLACED

I’ve read a few online reviews suggesting that A Thousand Splendid Suns is not as good as Hosseini’s masterpiece first novel, The Kite Runner. With all due respect to the writers of those reviews, they are so, so very wrong. At least from my perspective. I thought this novel was, if anything, better and more compelling than The Kite Runner. From the moment I picked it up, I was completely drawn in to the story of two women, Mariam and Laila, who start out from very different places in life but end up drawn together in ways that are seem impossible and yet inevitable.

The huge canvas upon which this intimate story is painted is Afghanistan over the last 30 years — a country in an almost constant state of war, with alliances and allegiances constantly shifting. The same characters who cheer the departure of the Soviet occupying force and welcome the Taliban as liberators, find themselves almost immediately afterwards crushed by the harsh realities of Taliban rule. There are no heroes and no good guys except for the ordinary people trying to survive in a world of chaos — particularly the two women at the centre of this novel.

END_OF_DOCUMENT_TOKEN_TO_BE_REPLACED

The Garden of Ruth, by Eva Etzioni-Halevy

This is a book I should love, but I’m afraid I didn’t.

In my ceaseless quest for excellent Biblical fiction, I stumbled across Etzioni-Halevy’s earlier book, The Song of Hannah, last year and read it.  I didn’t think it was as good as it could have been, but I was willing to try another book by her when I saw she had written about Ruth.  Actually, this novel tells two stories: the first is the well-known love story of Ruth and Boaz with a few twists that didn’t make it into the Biblical narrative; the larger frame story is that of Osnath, a young girl who visits the home of Ruth’s descendants three generations later, falls in love with the handsome but bossy Eliab, and determines to dig out the truth of Ruth’s story even though Eliab is determined to keep it from her.

END_OF_DOCUMENT_TOKEN_TO_BE_REPLACED 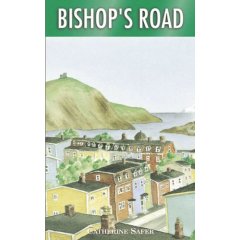 I’m not sure quite what to say about Bishop’s Road, except that I enjoyed it. It’s a good book, but an odd one. The novel is set in a boarding house in downtown St. John’s, and follows the interconnected lives of five eccentric women boarders over the course of a year or so. But that summary makes it sound like a straightforward, realistic novel of St. John’s life, and Bishop’s Road is more than that.

Once again, as with Jennifer Egan’s The Keep, I’m left struggling to find a way to describe this novel. It uses the trappings of realism to do things that belong in the realm of fantasy, so perhaps “magic realism” is the best label. The sense that this is not quite the world we know begins with small things that could almost be errors: hedgehogs in a St. John’s garden, a St. John’s in which Atlantic Place has been torn down and yet people still shop at Ayres (for those of you who don’t live in St. John’s, Atlantic Place is an ugly office/shopping building that’s unfortunately still standing, and Ayres is a department store that’s been closed for twenty years).

END_OF_DOCUMENT_TOKEN_TO_BE_REPLACED 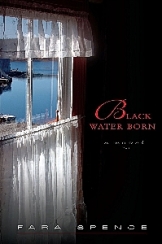 Black Water Born is the story of two young lovers, Lucky and Helen, in the tiny Newfoundland community of Burgoyne’s Cove in 1913.  Lucky is seen as an outsider in the community although he has grown up there, since his pregnant mother drifted ashore after falling off a ship and died after giving birth to him.  Helen’s family doesn’t fully accept Lucky, and a lover’s quarrel leads to chain of increasingly exciting and improbable events as Lucky goes off to St. John’s to seek his fortune and Helen longs to get him back.

The author, Fara Spence, is Newfoundland-born though she now lives “away.” In many ways she has done an excellent job of capturing the feel and flavour of early 20th-century St. John’s though some details are jarring.  One character in particular, Erik Skinner, reacts to other characters in a way that struck me as being completely impossible in a man of his era and social background.

END_OF_DOCUMENT_TOKEN_TO_BE_REPLACED

The Keep, by Jennifer Egan

I’m still not entirely sure what I thought of this book.  I didn’t dislike it, that’s for sure, but I also feel that I didn’t like it as much as I could have —  it didn’t quite live up to its potential.  Yet I did find it intriguing and read it very quickly, turning pages to figure out where the story was going.

The story unfolds on many levels.  First, and primarily, it is the story of two cousins, Danny and Howie.  Danny, a lifelong loser who always thinks he’s on the verge of making his “big break,” hasn’t seen his cousin Howie for many years (Howie, who was more of a loser in childhood, has actually had his Big Break and become rich and  successful).  But at Howie’s suggestion and on his dime, Danny leaves New York for an unnamed European location to help Howie renovate an ancient castle into a hotel.

Danny, who is the main character for this part of the novel, is not really a likable character — he resembles the kind of feckless losers I tend to fall in love with in fiction (not in real life, in recent years!) like Barnaby Gaitlin in Anne Tyler’s A Patchwork Planet — but with absolutely no charm and a basic selfishness that makes it hard to root for him.  And yet … Danny grew on me.  I found by the end of the novel that I did care about what happened to him.