The Golden Mean, by Annabel Lyon

I approached The Golden Mean with some trepidation; although it’s one of the most acclaimed novels in Canada this year, I had just had a pithy review from a friend whose taste I trust: “I just read The Golden Mean and absolutely hated it!” In this case, however, I’ll have to plant my vote against my friend and with the majority of literary critics: I found The Golden Mean completely absorbing.

How can any lover of history and historical novels resist a book about Aristotle tutoring the young Alexander (not-yet-the-Great) of Macedon? Such a concept could fail only if the writer’s execution of it failed, and Lyon’s succeeds almost flawlessly.

The prose is terse, spare, and beautiful, every word carefully chosen. Aristotle is the first-person narrator, and Lyon does a great job of bringing the reader into one of the most brilliant, original, restless minds in history. Aristotle is a genius — he never stops thinking, wondering, trying to figure things out — but also a very real and human man, suffering from bouts of depression (Lyon hints at a possible diagnosis of bipolar disorder for the great philosopher), succumbing to fear and uncertainty at times.

END_OF_DOCUMENT_TOKEN_TO_BE_REPLACED

A Patchwork Planet, by Anne Tyler 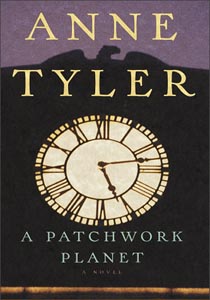 I first read this book several years ago (before I started blogging about everything I read here at Compulsive Overreader), and it remains my favourite of Anne Tyler’s many novels, though I don’t think it’s one of her best-known or most highly acclaimed.  After being a little disappointed by her new book, Noah’s Compass, I decided to reread this one to see if it retains its appeal for me, and within a page or two the answer came quickly and clearly: it does; it always will.

The allure, I’m sure, is in the first-person narrator of this story, because I am always (in literature and in life) such a sucker for troubled young men with good intentions. The main character in A Patchwork Planet is Barnaby Gaitlin, a young man just turning thirty. The son of a wealthy and prominent family, Barnaby lives alone in a one-room basement apartment and works for an odd job company, helping senior citizens lift and carry and do chores they’re no longer able to do alone.  Barnaby is clearly marked out as the black sheep of the venerable Gaitlin family: as a teenager he was in trouble with the law; as a youna man he married early, then divorced almost as quickly, leaving him now with a nine-year-old dayghter he sees only once a month.  Nobody has much faith in Barnaby except the elderly people he works for, who rely on his kindness and dependability, but far worse is that he has little faith in himself.

END_OF_DOCUMENT_TOKEN_TO_BE_REPLACED 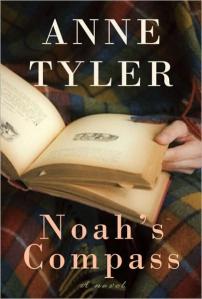 I’ve been an Anne Tyler fan for a long, long time, and I’ve read most of her seventeen novels. Some I’ve enjoyed more than others, but what I always appreciate is her incredible perceptiveness, how she unearths the tiny and apparently insignificant details that bring a character into sharp focus.

Noah’s Compass is the story of Liam Pennywell, a sixty-one year old man who has just lost his job and is not sure whether he is ready for retirement.  Liam is a lonely, solitary man who thinks he is doing fine on his own.  His first wife is dead; his second divorced him years ago; he has three daughters, a sister, and an elderly father, but is close to none of them.

On the first night in a new, scaled-down apartment, Liam is attacked by a would-be burgler and winds up in hospital with a head wound. At first, it bothers him terribly that he cannot remember any of the details of the assault, even though everyone assures him this is quite normal for a head injury.  His troubled quest to regain the lost memory leads him into an unlikely relationship with a younger woman. This, in turn, leads to further complications which force Liam to realize that he has not just literally lost the memory of his head injury but that he has also, metaphorically, lost the memories of much of his life — he has never been, as he tells someone late in the novel, fully present in his own life.

END_OF_DOCUMENT_TOKEN_TO_BE_REPLACED

Shades of Grey, by Jasper Fforde 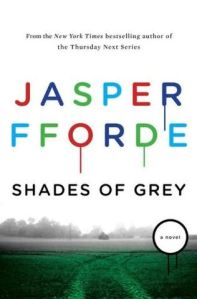 Let’s just get this out of the way up front: if Jasper Fforde started publishing his grocery lists or his to-do lists, I would buy them and read them and enjoy them.  He’s just that engaging and funny and creative as a writer, and after reading The Eyre Affair and all the rest of the Thursday Next books, and the Nursery Crime series, I am willing to trust him as a writer and go along on any ride he wants to take me on.

That said, Shades of Grey is one heck of a weird book.

It may be one of the weirdest books I’ve read. It’s weird even for Jasper Fforde, and that is saying a lot.  At the beginning I found it more difficult to read than his other books, and I gather from the Acknowledgements at the end that he found it more challenging than usual to write as well.

It was difficult, not because the writing is not as clever and fun and engrossing as Fforde’s writing always is, but because he’s created an alternate world to set the story in (as he always does) and this particular world is more complex and convoluted than the alternate-future of the Thursday Next books or the nursery rhyme character world of the Nursery Crime novels.

END_OF_DOCUMENT_TOKEN_TO_BE_REPLACED

The Bishop’s Man, by Linden MacIntyre

The Bishop’s Man, this year’s winner of Canada’s prestigious Giller Prize, is the most perfect example I’ve ever read of a novel about an issue that is broad, political, and significant while at the same time being personal, intimate and immediate.

It’s a novel that’s all too timely — though, sadly, one could have said that had it come out at almost anytime in the last 20 years. It will be sadder still if it continues to be timely and relevant in the next twenty years, because The Bishop’s Man deals with the ongoing scandal of sexual abuse by priests in the Roman Catholic Church.

That’s the “big” story, the hugely complex and controversial issue that drives the book.  But the small story, the heart of the novel, is the story of one man, FAther Duncan MacAskill, who finds himself lost at midlife, seeking meaning and connection. And that is, perhaps, the most universal story of all.

END_OF_DOCUMENT_TOKEN_TO_BE_REPLACED

Mistress of the Sun, by Sandra Gulland

Some years ago I read and enjoyed Sandra Gulland’s trilogy about Josephine Bonaparte, beginning with The Many Lives and Secret Sorrows of Josephine B.  After finishing the trilogy I sort of lost track of Gulland and only recently realized that I’d missed her 2008 release, Mistress of the Sun. Fortunately a quick trip to the library was able to remedy this oversight.

Mistress of the Sun is a well-crafted and engaging historical novel about Louise de la Valliere, one of the mistresses of Louis XIV.  While the book gives a wonderful sense of life in the early years of the Sun King, when Versailles was still a hunting lodge, the most interesting part is the wonderfully detailed development of Louises’ character. She is a contradiction: a devout and rather reserved young woman who becomes the mistress of one of the most flamboyant kings in history; a court lady who was renowned for her skill, not just at horseback-riding and hunting but at such exotic tricks as standing up on the back of a galloping horse.

END_OF_DOCUMENT_TOKEN_TO_BE_REPLACED 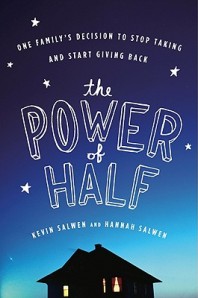 For my last book of Lent this year, I chose this short book written by a father and daughter (actually, the book is mainly written by dad Kevin, with short chapters and reflections by his teenaged daughter Hannah) about one American family’s experiment to do more to help others. The Salwens were an upper-class, upwardly-mobile family with a lavish Atlanta home when Hannah’s social conscience spurred them to think about doing more than just writing cheques to charities and occasionally volunteering at the food bank.  They made the bold decision to sell their house, buy one that cost about half as much, and donate the difference to a project that would help feed the hungry in Africa.

This is such a “Wow!” idea it’s hard not to be captivated by it.  The book describes the messier reality behind that engaging soundbite. First of all, the Salwens chose to do this just as the American economy, particularly the real-estate market, was tanking. So while they were quickly able to buy and move into a smaller house, they had to wait almost two years to unload the bigger house, and realized much less from the sale than they had anticipated (though still, obviously, a healthy chunk of change, enough to buy my house a few times over).