The Difference, by Marina Endicott 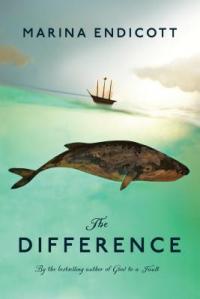 As  you can tell from this blog, I’ve read a lot of good books over the past several months. Some very, very good books. But it’s rare to read a book that rises up and engulfs me completely, that draws me so fully into its world that I fall in love with the characters, to the extent that I have to put it aside for a few hours at a time because I’m so terrified something terrible will happen to one of these characters I love, and I don’t think I can bear it. The Difference was such a book.

If The Difference had been much less well-written than it is, I would still have loved it, for its vivid and detailed depiction of a slice of history I knew nothing about, and had never even imagined before. The novel begins in 1911, aboard the Morning Light, a trading ship out of Yarmouth, Nova Scotia, bearing the main character, twelve-year-old orphan Kay Ward. She is travelling with her sister and brother-in-law, her brother-in-law being the vessel’s captain and owner, on a voyage around the world. The ins and outs of life on a sailing ship making a round-the-world voyage in the early 20th century make for fascinating reading — as do the details of a second voyage round the same route, eleven years later, on a passenger steamship. I would have loved the world of this book and everything I learned from it even if that had been all it had to offer.

But it wasn’t. The book features the deft, insightful, beautiful wordcraft I’ve come to expect from Endicott, one of Canada’s best and most underrated writers. All her books are gorgeously written, but not since Good to a Fault has she created characters so vivid and real for me.  The stubborn, difficult Kay, her sometime tutor Mr. Brimner (a clergyman who travels to his mission post on the Morning Light), and Aren (the boy Kay’s sister impulsively buys from a group of impoverished South Sea Islanders), were all so dear to me by halfway through the book I wanted to hide the book in the freezer for awhile because I was so worried about what might happen to them. The other characters — Kay’s sister Thea and her husband Francis, the crew of the ship, other people Kay encounters on her travels — are every bit as vividly drawn, so much so that the death of a relatively minor character hits the reader with as much devastating force as it does the other characters.

The central plot point of the story springs, as Endicott tells the reader in an Afterword, from a real-life incident: a white woman aboard a vessel in the South Pacific buys a native child for four pounds of tobacco. The casual racism of that real-life incident becomes, in the novel, inextricably bound up with the colonial assumption that one is “bettering the lives” of native people by taking them out of their indigenous surroundings, is a thread throughout this novel. Before the novel starts, in scenes that haunt Kay’s nightmares, both Kay and Thea lived with their father at the residential school he ran for indigenous children in Western Canada. While Thea, a young adult at the time, buys completely into the “white man’s burden” image of the “good” they are doing there, young and impressionable Kay only knows that her best friend Annie has been taken far from her own home and parents. Kay is wracked with regret at the things that happened to the children at that school. Her fierce refusal to accept Thea’s view of colonialism becomes a defining feature in her relationship with Aren, once he becomes part of their shipboard family — and even more so, once the family finds itself back in stodgy, conservative Nova Scotia.

To say more would be to say too much — perhaps I already have said too much — but I loved this book so much that I wanted to live on board the Morning Light forever, sailing warm southern seas with Kay, Aren, Mr. Brimner and the rest. This is a wonderful story told by a master storyteller. One of my very favourite books of this year.

2 responses to “The Difference, by Marina Endicott”